Looking back, it’s no secret that January was a stressful time for all those engaged in providing patient access services, as many people rang in the new year with a new benefits package. As a result, manufacturers (and their hubs) typically scramble to help providers and patients understand how these benefits affect a patient’s existing therapies.

The most common approach to this challenge has been for the hub to staff a small army of temporary workers to meet the growing demand for benefit verifications (BVs). The model is extremely expensive and inefficient because staff must be recruited, onboarded, and trained each year only to be repeated the following year.

Fresh Thinking for an Old Problem

A large international biopharmaceutical manufacturer decided to take a hard look at this issue for their market leading biologic portfolio. Within the organization, the issue even had a name. Aptly dubbed the “Blizzard” for the flurry of benefit verifications that occurred each January (north of 50,000 additional BVs), the management team was aware of the business impact of using inexperienced workers to perform BVs at the same time of the year that payers’ call volumes were at peak levels.

The manufacturer had a clear vision for what they wanted to achieve. First, accelerate the turnaround time to complete a BV. Making providers and their patients wait weeks to understand how their new plan design would affect ongoing therapy was no longer acceptable.

Second, improve the accuracy of the data returned in the benefits investigation. It was not uncommon for the provider and/or patient to receive incomplete or inaccurate coverage guidance, which typically could be traced back to either the payers’ rep or hub rep’s human error.

Third, if possible, reduce costs and the amount of management resources consumed to plan and execute the annual Blizzard.

The Evolution from Manual Labor to Automated Processes

Given the aggressive and far-reaching objectives, the management team did not believe incremental improvements to the current labor-intensive business model could deliver the desired results. Instead, a full transformation of the process in which the BV was completed was required. The team realized that both automation and accuracy were critical factors to a successful Blizzard redesign.
As such, they developed and tested automation and accuracy benchmarks along with strict operational standards. 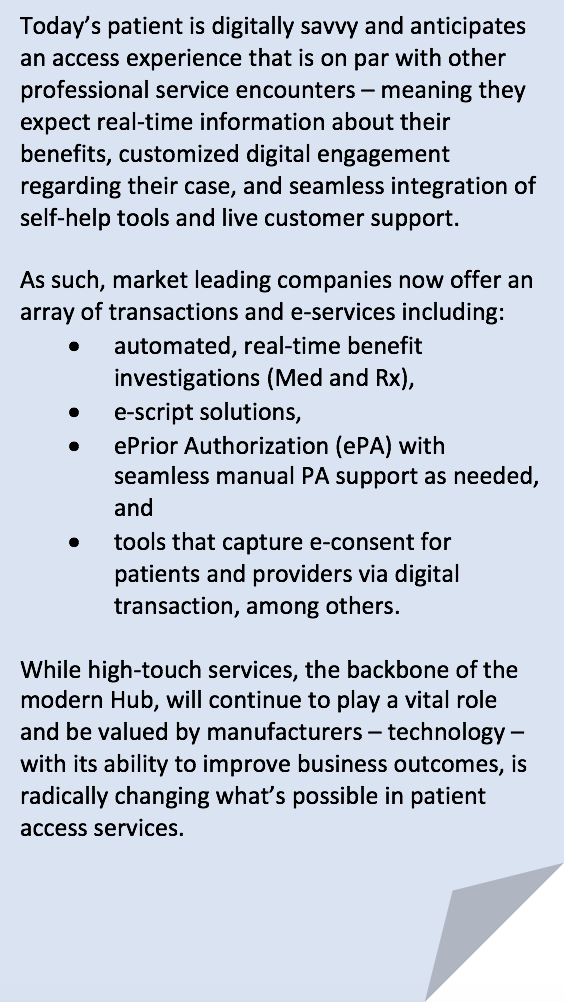 The manufacturer had previously incorporated an automated medical benefit investigation process into its systems and was reaping the operational and economic benefits of this powerful transaction. So, why not explore how an automated benefits investigation could add value to the Blizzard project?

A plan was designed to enable requests for benefit investigations to be processed in bulk via the automated benefits investigation process. The protocol required the transactional provider to accept a batch file containing tens of thousands of BV requests, process them, and within hours return all BV results to the hub in a predetermined statement of benefit format.

The manufacturer had historically hired approximately 400 temporary workers during the Blizzard period in hopes of completing the lion’s share of the 50,000 BVs over the course of 6 weeks. In this case, fortunately, history did not repeat itself. By incorporating the automated benefits investigation process into the Blizzard, the manufacturer achieved, and in some areas, exceeded its objectives.

Although manufacturers cannot change the fact that each year many patients will have substantial changes to their benefits and coverage design, the ability to automate a medical benefit investigation en masse is bringing new efficiencies to the hub and delivering better outcomes for providers, patients, and manufacturers.

The following chart depicts the key features and benefits of an automated benefits investigation. 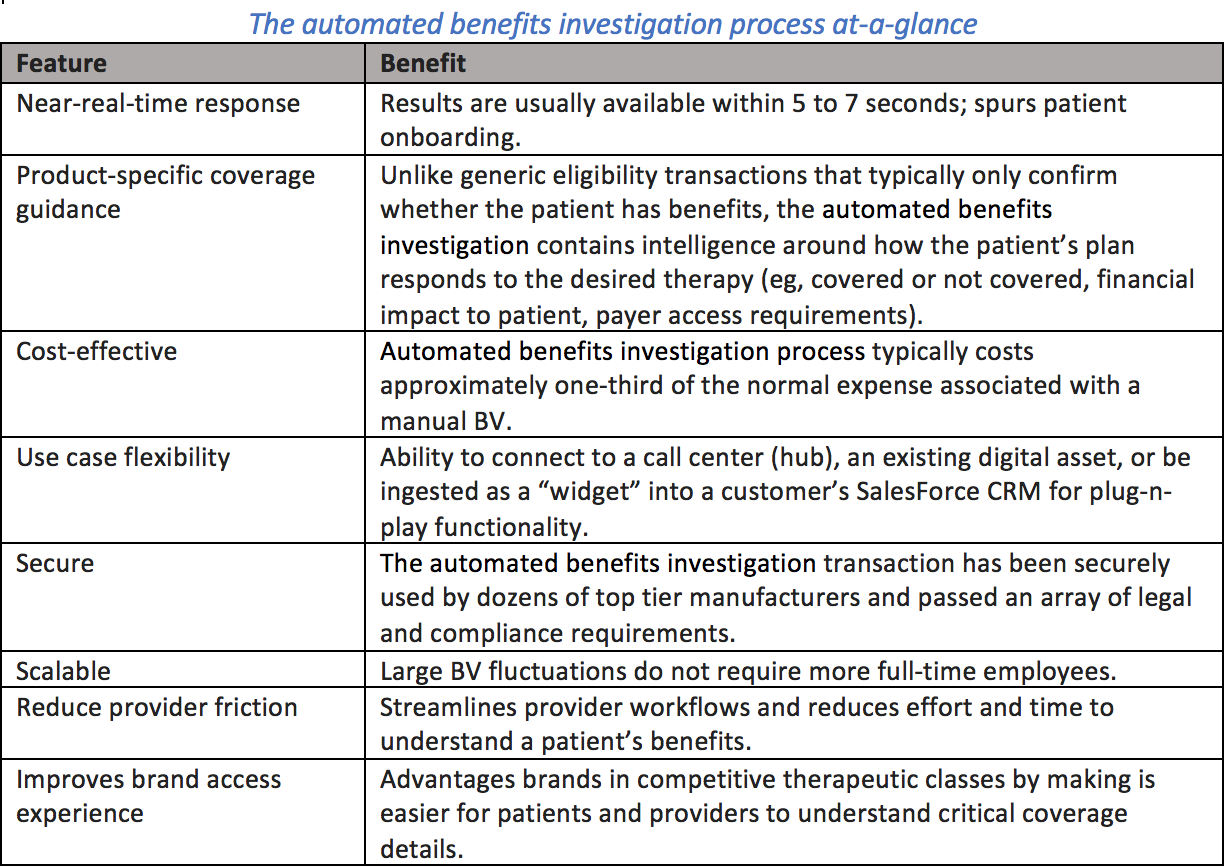